A downloadable game for Windows

I made this short game for the Ludum Dare 35 in three days, could be the base for a future bigger game.

A giant was turned into a machine, now he only wants to destroy everything. Our hero is protecting his town of the giant machine man, the cold white sword is the only weapon that can broken the materials of the giant's body, now the final fight is coming, help our hero!

A classic Third person controller, if you play Monster Hunter, The legend of Zelda or Assasins Creed is a similar Controller.

By now you can run, jump (too high to hit the giant) and make two sword movements, horizontal and vertical swing.

You can play using a Gamepad or the Keyboard.

In the keyboard you can move the character using the arrows or W,A,S,D. You jump with "Space", the sword could be used pressing "E", the camera is controlled by the mouse.

The Giant has diferent attacks, it could be really dangerous for our hero, so try to stay away and attack in the right moment.

The LudumDare theme this year was Shapeshift, the giant born thinking in a organic body modified and converted into a machine, the sketch was made in a quarter of hour and the Hero was drawing after, I have a lot of influence from Asia (the hero is similar to a samurai) and also I take inspiration in the steampunk style for the giant.

I had a lot of ideas when I was making the game, but I tried to make it simple, factible for a short time of development.

Initially I thought in making the giant really really big, like Shadow of the Colossus, but I prefered to simplify it, at the end is about a Warrior in a battle.

I worked in to obtain a high quality visuals and a beatiful art direction, the visual effects and the particles really help me increasing the fantasy.

The Music in the Background was composed by me.

This is a short game, but I really try to make it with all the quality I can do for only 3 days of work, enjoy it.

Just unzip the file, and play.

-The Original LudumDare 35 version is the first version upload before the LudumDare jam finished, it have some bugs.

-The Fixed Version 1.1 is an Update of the Original Ludum Dare Version, it solved some issues and bugs with the Keyboard Controller, now you can press the mouse buttons to use the sword and jump, also voices are added to the hero and new effects like burning in the magma and a visual effect before the giant's spin attack.

-The Fixed Version 1.2 is an Update of the Fixed 1.1, it add jump "brake" when you press to the oppositive direction of the jump, some other issues solved.

This game was tested in a computer with:

It Runs good at 720x480 resolution and low quality. (Some image effects affect the performance in highest resolutions)

This game was created and tested in this computer:

I played this a while back, it was hard, BUT I DID IT!

i haven't tried it yet, but damn, it looks beautiful 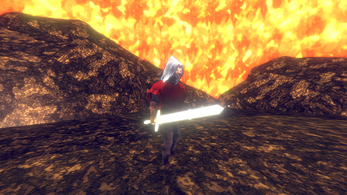 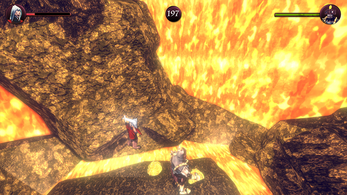 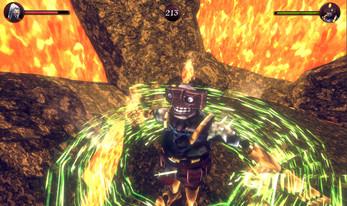 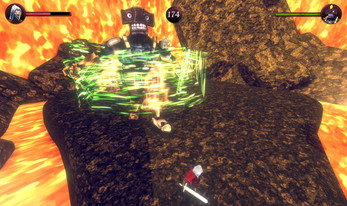 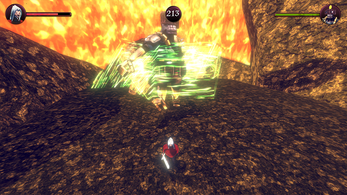